Thank you party a great success!

On June 18, the Lehrter took place in Mittelfeld a festival takes place, which is organized by the living environment working group of the Municipal Prevention Council Döhren-Wülfel (KPR), the Church of Grace of the Holy Cross and the cultural initiative Döhren-Wülfel. The impetus for this came from Beatrice Lührs (KPR), who was from the willingness to help in Mittelfeld was and is enthusiastic.

The festival was sponsored by the Integration Advisory Board Döhren-Wülfel, a drink donation from REWE Herhold oHG and apples from Obsthof Hahne. The aim of the festival was MittelfeldI would like to thank them for their active help at the end of February/beginning of March, when Jevgeniia Dik, operator of the alterations shop "Jenny Idea", started a call for donations for Ukraine and was almost overwhelmed by the incoming amount of donations in kind. Many MittelfeldHe didn't take long to ask, but spat on his hands and helped to sort and load the donations (see article in Maschseeboten 04/22) For this willingness to help in Mittelfeld should say thank you!

The festival began with Pastor Holger Schmidt blessing the loaves of bread, which were not only baked according to a Ukrainian recipe, but also prepared with sourdough that came directly from the Ukraine.

Gradually, the place filled up, and cold drinks were particularly popular – no wonder, since the celebration took place on the warmest day of the year so far. But also the delicious things from the grill (chicken breasts, poultry sausages, grilled cheese and various vegetables) and the salads sold like hot cakes. On behalf of the Ukrainian association in Lower Saxony eV, Denis Dik thanked everyone present and also all residents of Hanover, Lower Saxony and the Federal Republic for the great support of the Ukrainians.

Lots of people came by, children were made up, addresses were exchanged, old-timers told how things used to be in Mittelfeld was, in between people laughed, ate and drank, in short, it was a nice party that approx. 80 to 100 Mittelfeldbrought them a little closer together. 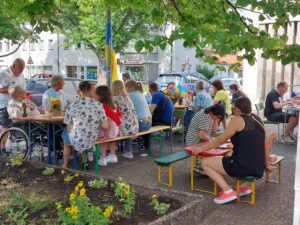 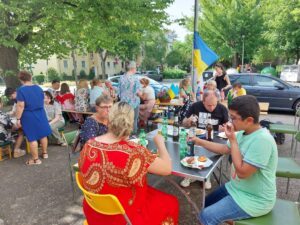 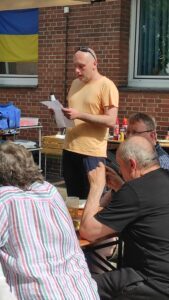 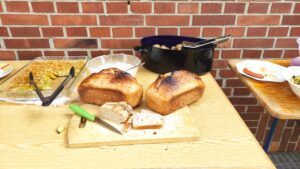 »We look forward to your event information.